With this blog post, Microsoft announced the March update of the Developer Preview. The usual Docker images will be publicly available on April 2nd and will contain the Microsoft Dynamics 365 Business Central release candidate.

Anyway, it is an import feature, so I’m going to explain it here. The tableextension object has four new triggers: 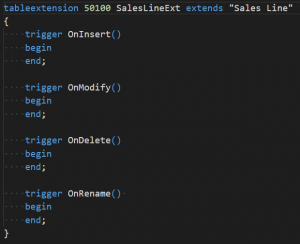 What are these triggers and how are they related to the OnInsert / etc. triggers in the base table? And what’s the difference with the already existing OnBefore and OnAfter triggers in the tableextension object?

Let me explain the background.

Back in NAV 2016 we got database events that we can subscribe to. Those events are executed after the database operation. If you want to update data in the record, you have to use MODIFY again, otherwise data will not be saved to the table. To read more about this behavior, I can recommend this in-depth blog post from Vjeko.

With AL this behavior has not changed. The database events are still being raised after the database operation. However, with AL we also got the tableextension object with triggers like OnAfterInsert, etc.

So we still need to do Rec.Modify in the tableextension trigger to preserve data in the record. Which can potentially lead to unintended looping between insert and modify triggers and event subscribers.

With so many triggers and events, I thought it would be a good idea to compose a list with the correct order in which they are executed. So here is a table for the database insert (same applies to modify, delete and rename of course):

I think that the OnAfter triggers in tableextensions are now getting less important, to not say quite useless. The new triggers are very close to writing extra lines of code to the end of the C/AL triggers in the base tables (not 100% the same, some restrictions apply, see below). In C/SIDE you don’t write a MODIFY in an OnInsert trigger, do you? The new tableextensions triggers don’t require a modify either, so that is a great improvement. In my view, the new triggers are what the OnAfter triggers should have been in the first place. Ok, I know that the logic behind OnAfter is: after something is completed, so it should occur after the real database operation (that’s the logic Microsoft follows). But in my mind, and I think in the minds of many NAV developers, OnAfterInsert means: after OnInsert trigger of the table, but still before any database operation. Just because with C/SIDE we do the same when we add code to the end of the OnInsert trigger.

To make the OnAfter triggers less useless, one could set a rule like: put code that modifies fields in the table in the new tableextension triggers and all other code should go in either the OnAfter triggers or an event subscriber in a codeunit. But then again, I would rather go with an event subscriber because then I know that the code will always run, regardless of the RunTrigger parameter. But it also depends on the scenario of course.

Anyway, you probably want to move your code from the OnAfter triggers or the event subscribers to these new tableextension triggers to avoid the unintended endless loop that can be caused by using Rec.Modify.