It’s the week after. Busy weeks lay behind, Directions EMEA was this week in Madrid and two weeks before we had Directions US in Orlando, Florida. A lot of sessions and workshops have been delivered. Together with the Cloud Ready Software team we delivered about 20 sessions on each conference.

If you have to present a lot of sessions yourself, it is of course hard to attend others. I was able to attend a few interesting sessions, sometimes partly. Unfortunately I had to skip others. That makes it hard to get a complete overview of what’s new in the upcoming version, but I think I managed to get the most eye catching parts of it.

It is however not my intention to come up with a list of new features for Dynamics NAV 2018 and Dynamics 365 “Tenerife”. Waldo already came up with a list, and so did Saurav Dhyani and you should of course look at the official Dynamics 365 Roadmap. James Crowter shares his opinion on Dynamics 365 SMB plans here. And Tobias Fenster explains why he likes Dynamics 365 / NAV here.

One message came out very clear: Dynamics 365 “Tenerife” (“Tenerife” is a code-name) will be available in the cloud and on-premise. Microsoft is not cloud only, but they are cloud-first. 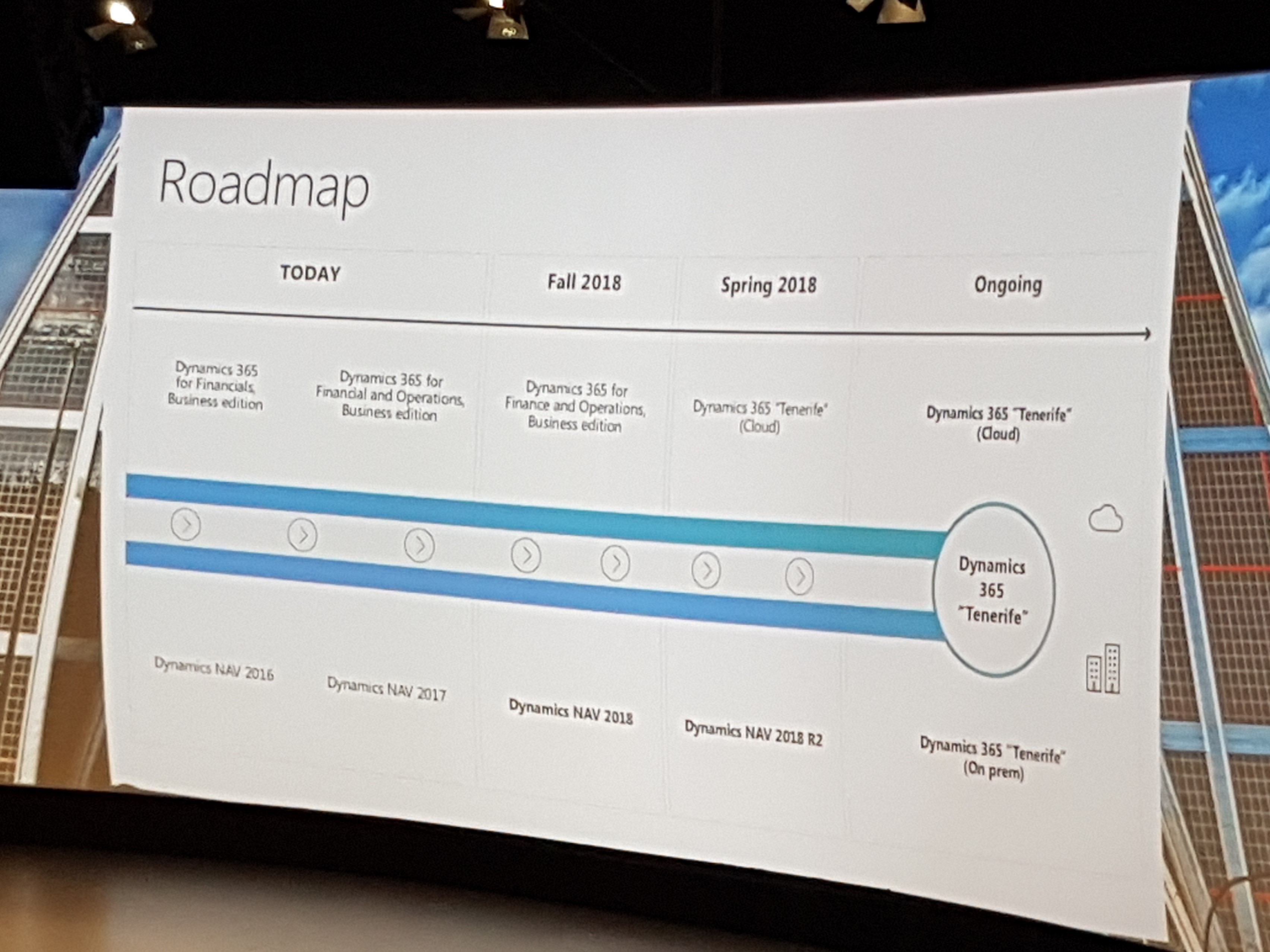 For Dynamics 365, Microsoft hosts and manages their own software. Hence, they face the same challenges as partners and customers do: how to set up a platform with a minimum of costs, lightning fast performance, easy maintanance and minimum downtime for upgrades.

And that pays off in a number of platform improvements like:

These are just some of the many improvements in the next version of Dynamics NAV. All of this results in a platform that has never been in better shape.

Another slide made clear that the cloud version will contain full NAV functionality and will have the same code base as on-premise. 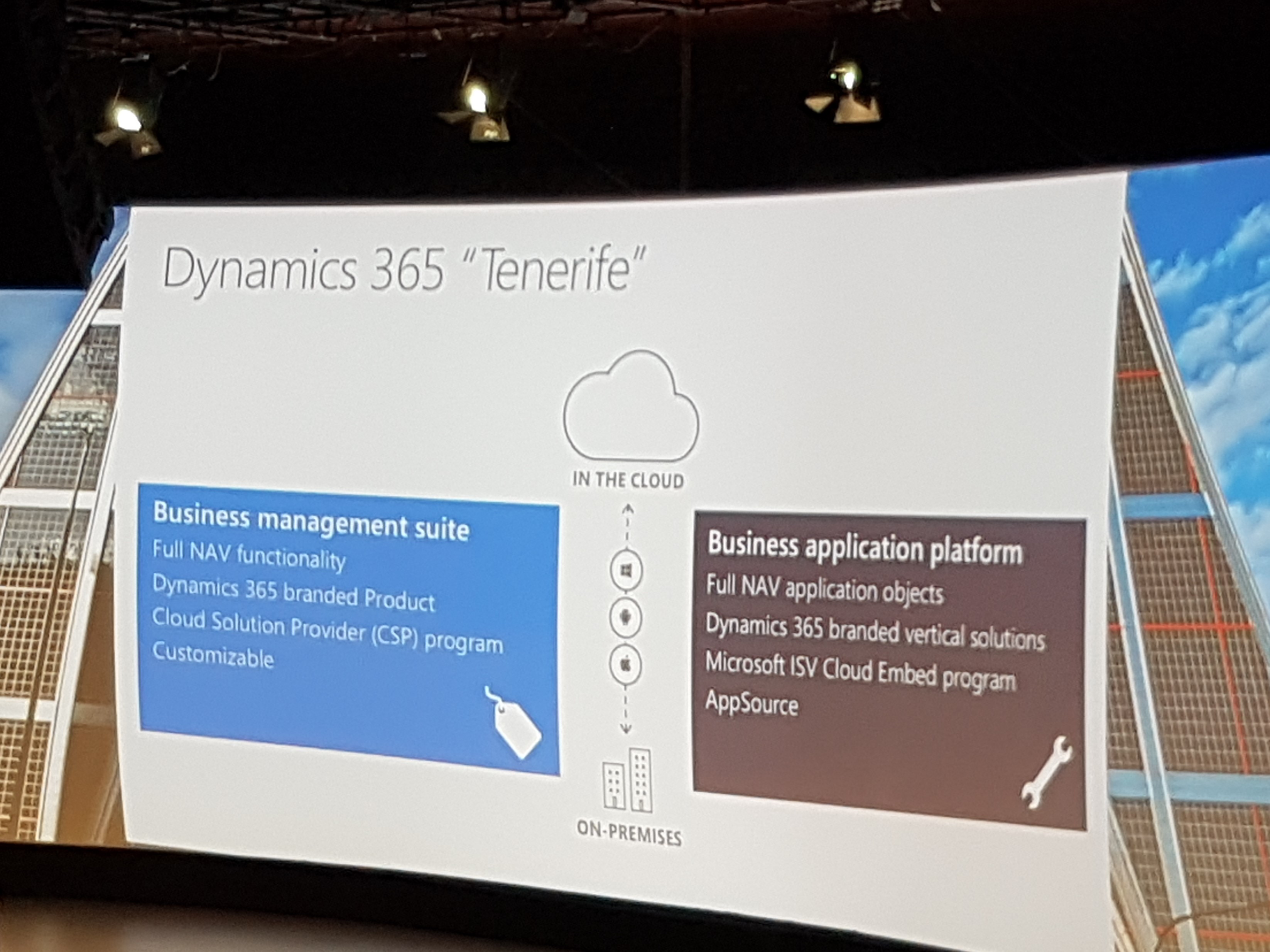 Now, this has some consequences that I would like to put my finger on.

First of all you must understand that having the same code base doesn’t necessarily mean you have the same product. Microsoft thinks about this in terms like ‘same code base, different experiences’. What does this exactly mean? Well, it means that the product knows if it runs as a Dynamics 365 application or not and is able to adapt to that. On the Dynamics 365 platform it will give the users a different experience compared to the on-premise version.

An example of that is the notification that pops up on the Role Center. Compare these two screens: 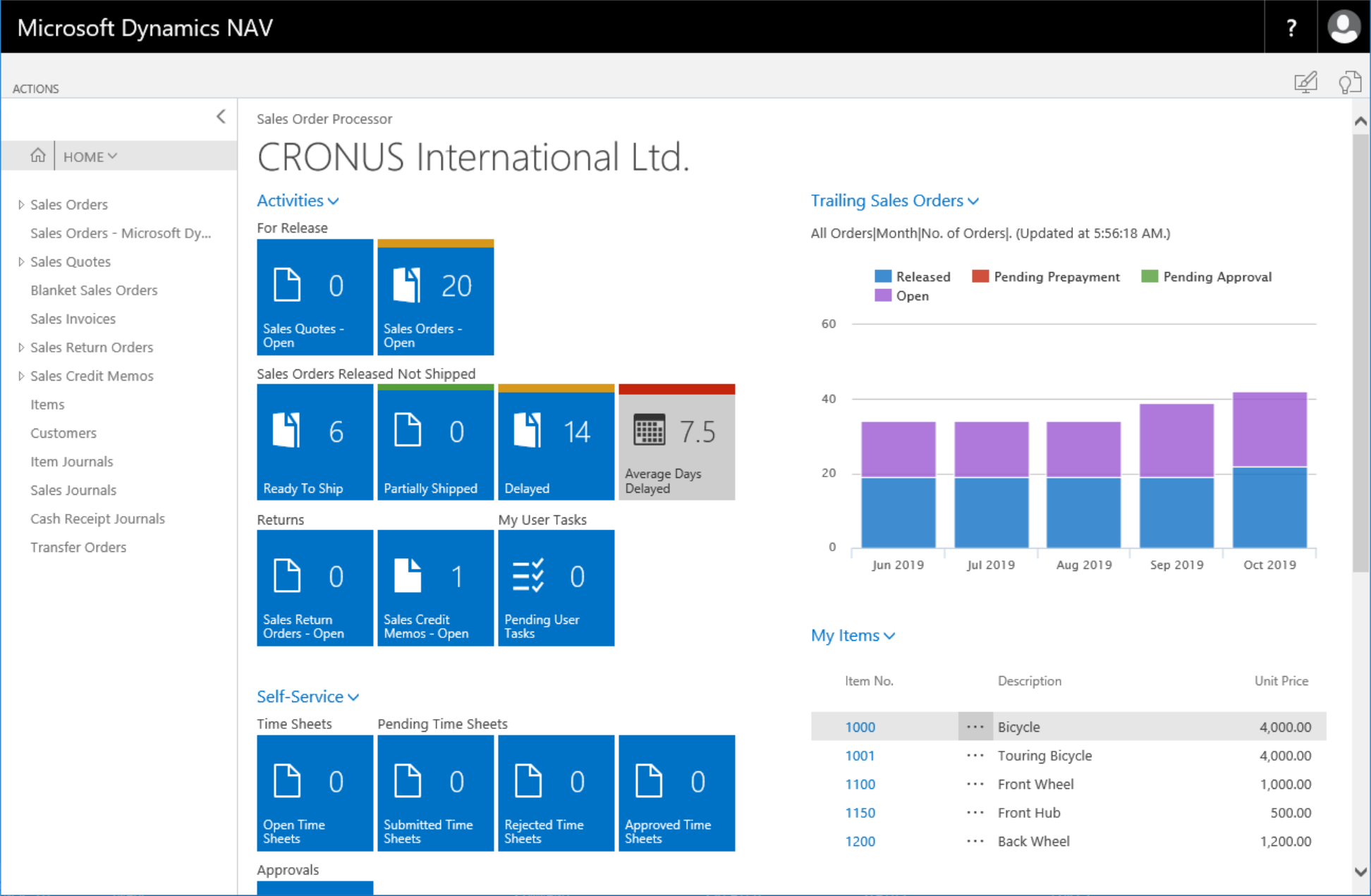 The screen above is the standard Dynamics NAV Role Center. The screen below is exactly the same installation, but now put into Dynamics 365 mode (SaaS mode). 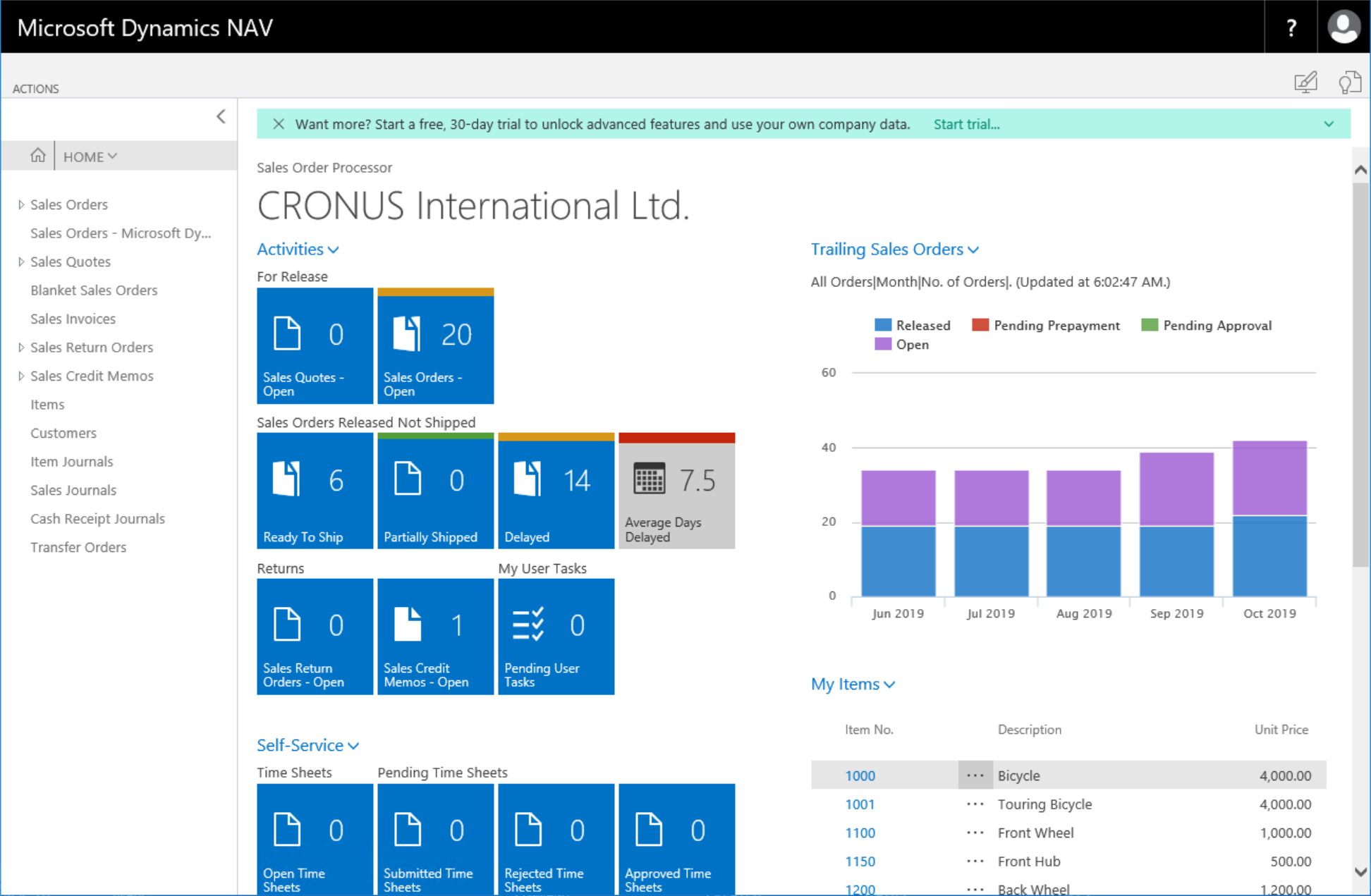 It’s just a simple example, and only a notification. What I want to point out is that a lot of code, (system) tables and objects have been added to create the Dynamics 365 experience. Application Areas is such a feature that is intended for Dynamics 365 only. It can be set via the Experience tab on the Company Information page, but it is hidden for non-SaaS installations. However, it affects almost any Page object.

Several years ago, it was quite normal for a Dynamics NAV developer or consultant to know the application inside out. The data model didn’t have many secrets, you felt at home in the code and knew exactly the flow of data and processes. But in the next version you will come across objects and code that you have never seen before. Without any documentation because it is not intended for on-premise use or for customizations.

Well, that’s definitely going to make it more complex to do customizations on Dynamics NAV 2018. In other words: simplifying the user experience makes the code more complex.

Dynamics NAV 2018 will support the deployment of Extensions v2 apps. So what I definitely recommend is to take the plunge and go with VS Code and Extensions v2. In that way you don’t have to customize the base objects. Upgrades will be easier and faster and you have the joy of a modern development environment.

Of course you will come across situations that you simply cannot solve with Extensions v2. But that shouldn’t stop you from moving forward and bring as much as possible to Extensions v2 and minimize the customization footprint in Dynamics NAV base objects.

Another point that I want to make is that Dynamics NAV 365 “Tenerife”is not alone. Take a moment to look at this picture: 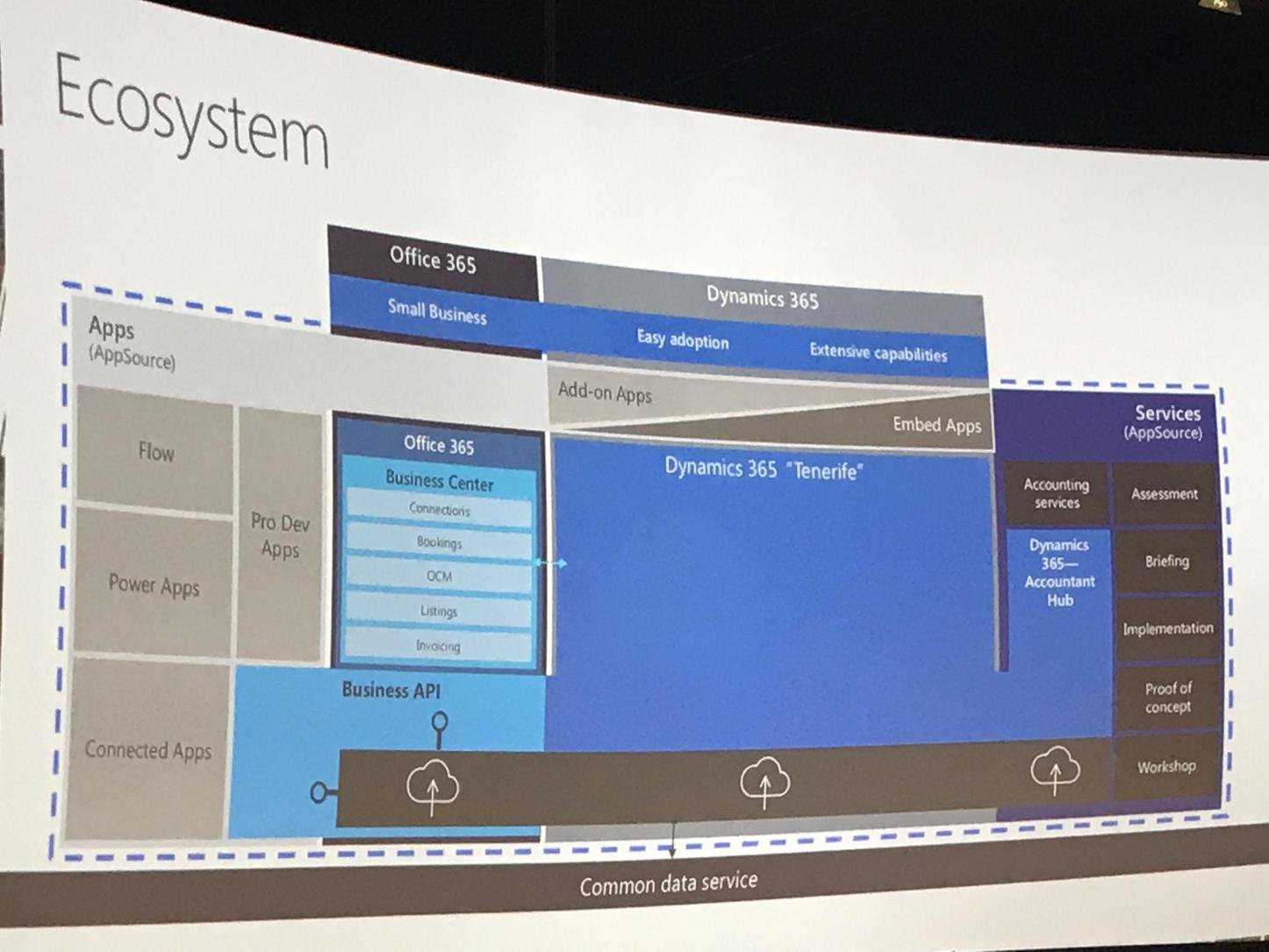 A lot of different apps, services, platforms and what else are around Dynamics 365 “Tenerife”. It’s now enough to have knowledge of Dynamics 365 / NAV. To leverage the power of the whole Microsoft stack, we need to learn more about other Microsoft services and products. That will definitely push NAV geeks out of their comfort zone!

I’m not a prophet, but let me predict something: those who are able to adapt and embrace this ecosystem will be better off in the long run. I’m not saying that you can get away with Dynamics NAV only, but it will be harder and you will play a subordinate role. Or, to put it different, the whole Microsoft stack offers so many opportunities to empower the user and enricht the user experience, who would not want that? The user will definitely like it and the partner who is able to deliver it has a big advantage.

So far my take on the current status of Dynamics NAV 2018 / 365 “Tenerife”. Would like to see your comments, do you agree or totally disagree? Please let me know!