A few days ago we got a new NAV Development Preview from Microsoft.

As Waldo already explained on his blog, a lot has changed this time. Well, I’m not going to repeat after him. I got the opportunity to play for a couple of weeks with it, and I wanted to share some tips and tricks with you. We are all new docker images, the new type of deployment. I do not know all details of docker, that’s for sure. If you have the chance, I recommend to join the sessions about Docker at Directions US, Directions EMEA or NAV Techdays. And I can definitely recommend to read the blog of Tobias Fenster for more in depth information around Dynamics NAV and Docker.

Let’s first get used to the difference of a docker image and container. A docker image is a prepared blueprint of an application. It is a complete filesystem that contains all files and settings needed to run an application. In the case of Dynamics NAV, it contains the NAV Server Tier, a SQL Server Express instance, the NAV Web Client, well… just everything that’s needed for a complete NAV environment.

Docker containers run on a host computer. In the case of the NAV Developer Preview that host is an Azure Virtual Machine. It is also possible to run it on a local Hyper-V machine or even on your local Windows 10 environment. In this post, we will focus at the Azure VM host that is created with the link provided by Microsoft: http://aka.ms/navdeveloperpreview.

There are a number of scenario’s that I came across and I thought it would helpful to share them:

Let’s start with the most easiest one, a list of containers.

The command for that is

As you can see the output looks distorted. There is not so much you can do about that. However, there is an option to specify which columns you want to see. For example this command:

The command docker ps only displays running containers. To see all containers, including the stopped ones, use the -a parameter:

You see what I mean with distorted output? Luckily the parameters can be combined:

The CONTAINER ID is important. We are going to use that on further commands that deal with containers. Luckily, we don’t need the whole ID. As a matter of fact, what we see here as the ID is not the complete ID either. The ID is actually a whole bit longer. However, when it comes to ID’s with docker, we only need the first few characters, only those characters that makes the ID unique. In this case 6e and 2d are already enough to uniquely identify the containers.

Or, if you prefer, you can use the name of the container. When you start a container, you can specify a name. If you don’t, then docker will assign a name. Here I have included the name in the formatted output.

In this list, the name generated by docker is gifted_tesla. I really didn’t invent that!

Anyway, every time I use the name gifted_tesla below, you should replace it with the container name or id of the container you are working with.

How to stop a running container

Ok, we have a container running. How to stop it? Let’s stop the container with name gifted_tesla in our list of running containers.

Remember, you can also use the container id:

That looks a little bit more technical and mysterious, doesn’t it? If that is more your cup of tea, feel free to use the container id instead of the name.

Now we have a running container and a stopped container:

Please note, there is also a command docker kill. The difference is that the stop command tries to gracefully stop the container while the kill command stops it almost instantly.

How to start a stopped container

I guess you can almost guess the command…

Of course you should wait until the STATUS says healthy, before you start using the container.

Now, this command is also needed in case you have stopped and started the host (the Azure VM). If you need to start the navserver after a reboot, simply use this command:

How to remove a container

Ok, let’s say that a container has done its duty, and now you want to completely remove it. You know how to stop it. But then the container remains in the list of stopped containers.

The command to completely remove the stopped container is:

So… the tesla is history now… 😉

Please be careful with this command: it removes the container without an option to recover it!

To start a new container, you need to specify the image. So let’s first have a look how you can get the available images on the system.

Every image has a repository and tag that together uniquely identify the image. And of course the image id is also a unique identifier.

The NAV Developer Preview September Update comes with the dynamics-nav image, tagged with devpreview-finus. There is some logic behind these names that I will not touch here, since the repository itself, navdocker.azurecr.io is currently secured with a password. So at this stage, it doesn’t make sense to go into details about tag names, I leave that to Microsoft to disclose at their moment of choice.

How to spin up a new container

There can be several reasons to spin up a new container. E.g. you screwed up or lost the existing container. Or you want to run an extra instance to test with, or to test another app.

Now this is a more complex scenario, and I will certainly not be able to cover all different scenario’s. Let’s start with the basic command docker run:

The parameter -e puts the environment variable ACCEPT_EULA inside the container with value = Y. Without accepting the End User License Agreement, the Dynamics NAV container will fail to start.

Instead of this complete image name, we could also go for the more mysterious, but shorter, usage of the image id:

The output stops here and doesn’t return to the PowerShell prompt. All output from the container will immediately be displayed here, as long as we leave the window open. To stop this, simply press Ctrl+C to get back to the prompt. All output will be available in the log anyway, so no worries that you lose any information.

As you can see, the container got a generated hostname 4115d4529433, which is not really useful. In fact, this is the id of the running container.

Why on the host VM? Because at this moment, you cannot connect to this container from the outside world, it is only available from inside the VM.

How to connect to the container with VS Code

Inside the VM you will find Visual Studio code. With the output from the docker run command above, you will be able to create a workspace in Visual Studio.

In the launch.json change these settings to the values in the output from docker: 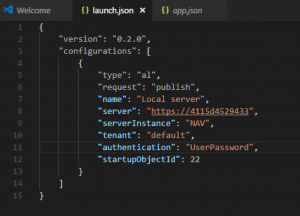 Remember to change the app.json to the correct language setting. If you have the US image, then you don’t have to change. 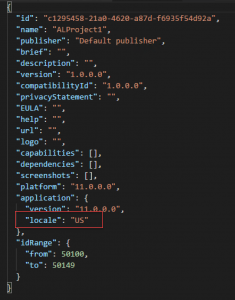 Remember to set the tenant to “” in launch.json after you downloaded the symbols. Otherwise the Web Client will not start. This is a known issue and will be solved in a future update.

With this information, you should be able to start using the docker images. There is of course a lot more to know about docker. The topics in this post is just scratching the surface. See https://docs.docker.com/engine/reference/commandline/docker/ for a complete reference of the command line options.

I have one scenario left out: making the docker container accessible from outside. That is perfectly possible. I will come back to that in another blog post.