Recently I studied carefully the content of What’s New: Developer and IT Pro Changes for Microsoft Dynamics NAV 2016. One topic (amongst a lot of others) draw my attention. Let me quote the paragraph here:

And this is the result of starting the upgrade: 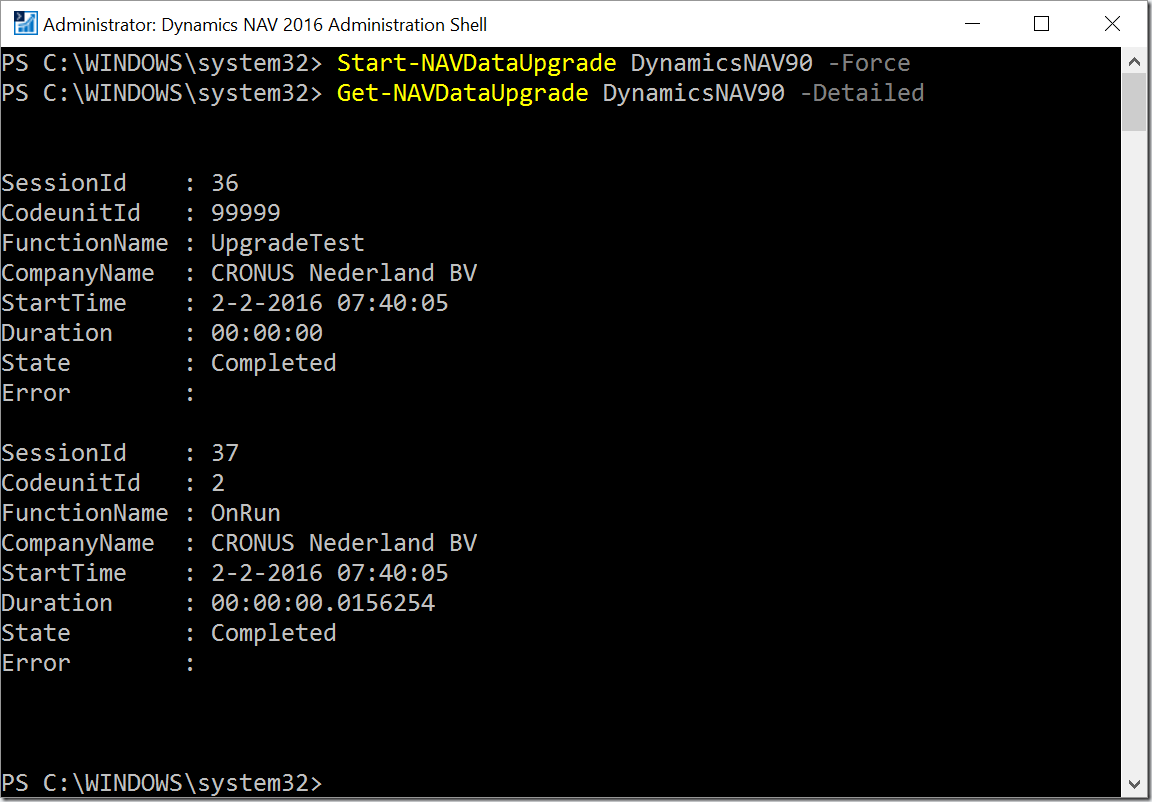 As you can clearly see, Codeunit 2 has been executed automatically.

Now this is something that I really want to bring to your attention. This behavior can lead to unexpected problems after the upgrade.

For sure, you want to run Codeunit 2 when you upgrade to Dynamics NAV 2016. It will not only initialize some new set up tables, it also runs the Workflow initialization by calling InitWorkflow in Codeunit 1502 Workflow Setup. This process adds a lot of texts to the workflow tables. But… PowerShell cmdlets run by default in language en-US. So if any text is inserted into the database, it will be English and not the local language that you want to use! As a result, we recently ended up with a Dutch customer database that contains English workflow names and descriptions. We needed to cleanup a couple of tables and run workflow initialization again in the correct language. In all companies… (not a big problem, see below…)

The main problem with the Start-NAVDataUpgrade cmdlet is that it has no language parameter, like the Invoke-NAVCodeunit cmdlet does. It just runs in en-US language mode. I have tested if the Services Language setting in the NAV server settings would change this. Unfortunately that was not the case.

Is there any solution?

Actually there are several options.

One of the possibilities is to change the language in the very first line of Codeunit 2. But that adds another customization and we don’t like that. Hey, there is probably an event, one says. I’m sorry, didn’t found any. Could be an idea, however. Add an event OnBeforeCompanyInitialize and OnAfterCompanyInitialize to Codeunit 2 (Microsoft, are you there?).

Actually, the best option is to use the SkipCompanyInitialization switch on the Start-NAVDataUpgrade cmdlet.

This option is only available with PowerShell, you can’t set it when you start the data upgrade from the Development Environment.

After running the data upgrade, you can run Codeunit 2 manually in the correct language. If you need to run it after all, of course. To run this in all companies, you can easily use this PowerShell command:

But do we really need to run Codeunit 2 each time that we run a data upgrade? Well, certainly not. Up to CU5 this Codeunit didn’t change. And in previous versions there was never a need to run company initialize on every and each upgrade, e.g. after importing a fob file. So why did Microsoft add the option to automatically run company initialization at every data upgrade?

My best educated guess is because Codeunit 2 also calls the initialiation of workflow. This is of course a one time action, only needed when you import a fob that contains new workflow events or responses. So the train of thought is probably: when a fob contains new workflow elements, you just can run company initialize to update the workflow data. By the way, isn’t it strange that tables like 1520 Workflow Event and 1521 Workflow Response have Data per Company = Yes? But that’s another discussion…

Now the final question is, how can we initialize workflow without running company initialize? Well, the answer is easy. Use the same PowerShell cmdlet:

Finally, I would like to suggest to Microsoft that any PowerShell cmdlet that runs a Codeunit use a Language parameter. At least Sync-NAVTenant and Start-NAVDataUpgrade should have this option, so you can write upgrade codeunits with language independent code.

There is one more thing that you should be aware of. In previous version of Dynamics NAV there were setup tables that were only accessible with the Extended Pack. In Codeunit 2 this was solved by this code:

I haven’t checked with NAV 2015, but at least in NAV 2016 this table is now in the Starter Pack. But ISV’s might have added initialization code to Codeunit 2 that does the same with their tables. So you want to run Codeunit 2 with the customer license, right? But what if you run the upgrade with your partner license because you have some upgrade Codeunits in the customization range? There your go, then Codeunit 2 will be executed with your partner license, which potentially leaves the database with records in tables that are not accessible with the customer license. I don’t have to explain what happens when the users start using the application, right?