At the first day of Directions EMEA 2013 in Vienna, there was a session called ‘Building apps for Microsoft Dynamics NAV’. One might think that this session would explain how apps can be build, what tools there are, etc.

Well, that was not the case.

Noticed that the version number is missing in the session title? It is a hint that this session was not about an actual or announced version. Instead, Microsoft shared their vision on the future about apps.

That’s interesting! What directions are they they thinking?

The speakers, Marko Perisic and Rikke Lasse, showed us at first some numbers:

This means that devices is definitely not an option. It is a must! People are not sitting behind a computer the whole day. They move around and carry several devices with them: mobile and / or tablets. But they expect something from their device. They expect an app that helps them doing their task, at their location, at their time.

Next, they pointed out that it is a very hard job, to not say impossible, to make a “one size fits all” business system. The same counts for apps. But what makes a business system attractive? Being the right tool for the job, easy to start, efficient in use and easy to remember infrequent tasks.

Ok, but these are general and not really eye opening views, are they?

Hold on sec, the speakers moved on and this was just the introduction.

They explained there is a potential for, what they call, “unprecedented fit”:

There never has been a better time to build a role tailored user experience! If we focus on user experience, we focus on business value. For this reason, at the WPC 2013, UX design was introduced as an organizational competency. Want to see what they mean? See this demo: http://blogs.technet.com/b/keithmayer/archive/2013/07/10/best-of-wpc-2013-28-awesome-user-experience-demos-with-windows-8-1.aspx

Until now, the role tailored user experience by Microsoft Dynamics NAV was tailored for a certain process: a sales order processor, a bookkeeper, machine operator, etc. But know they introduced a new scene: a user (they called him Stan) that has different tasks. Somebody who:

This is really a mind shift. This scene fits the average SMB user much more than the regular personas doing a specific task. From my own business, I recognize this kind of users.

Based on this user, a scenario was worked out where Stan visits a customer and need to know different types of information like history of the customer (posted documents), what was promised (open orders), what can be promised (inventory levels) and extra sales (item catalogs).

To demo how an app would help with finding this information, they gave a demo of an example app that looked like this: 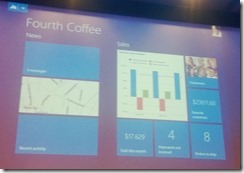 Note that this is an example app, to demonstrate possibilities. Not an app that is to be release now or in the future.

This app shows information in the same way as we know from the Windows Store on Windows 8. 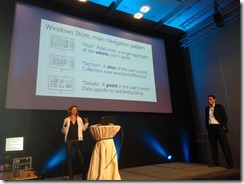 But if Microsoft is not going to release an app, what do they intend to do?

They think about different apps:

They don’t shut their eyes for the fact that there are different device platforms like iOS and Android. So they will make sure to have a framework that integrates on different platforms while still having to code it once.

The device strategy for Dynamics NAV will most probably be:

Building great apps is not about having all features, but most frequent. They should be role tailored, specific to the scenario en have a superior design experience.

This way of thinking is, according to the speakers, currently not in the DNA of the NAV channel. But starting with next release, Microsoft wants to enable partners to develop real apps!

My opinion on this whole story is: they are right on the fact that we definitely need apps for different platforms. But I expect partners to start complaining that Microsoft just releases a tool kit instead of apps. And I think that partners who do not complain, but start to make great apps for their vertical, will win the game!