This is a first in a life time experience: to review a book. Without thinking it over, I replied in a thread on LinkedIn where Packt Publishing asked for reviewers for their new publication, the book ‘Getting Started with Dynamics NAV 2013 Application Development’, written by Alex Chow. 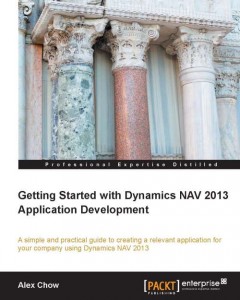 This post is just to mention that I started to read the book and is not the review itself. The book contains approximately 200 pages, so it takes a while to read them. But now I can’t hide myself anymore, I have to publish a review in a reasonable time from now. 😉 I’m just behind Luc, who already started reading the book: http://dynamicsuser.net/blogs/vanvugt/archive/2013/06/16/getting-started-with-dynamics-nav-2013-application-development-alex-chow.aspx.

It is a lot of work to write a book, and I would like to congratulate Alex with this achievement and thank him for his contribution to the Dynamics NAV community!

I would also like to share my first impression. Not about the content of the book, but the target readers. Being a developer at heart, and based on the title of the book, I expected the book to target developers who start their journey in the Microsoft Dynamics NAV environment. And the first sentence in the preface of the book looks like to prove that: ‘Let me start out by saying congratulations on your decision to work with Dynamics NAV.’ But then, in a next paragraph it says ‘Your company has made a wise decision to use Dynamics NAV as its main business software’. That confused me, and I wondered if the book would be for starting developers or for end users.

The paragraph ‘Who this book is for’ answers this question:

“This book is for any user whose company has bought or has plans to buy Dynamics NV as their main business software. This is also for any developer, who may be familiar with another accounting software, but who wants to get into the Dynamics NAV field.”

That is a clear statement, but also one that I didn’t expect.

Because developers and users are different. Users know how to run their business, which information they need, etc. They don’t know how to develop software. That’s the domain of the software developer. So now I’m puzzled. Is Alex trying to educate users how to build their own software? I can hardly believe that.

The preface eventually helped me out.

“To get acquainted with the Dynamics NAV environment, it’s important for the user to create an entire project from start to finish, not just a specific element, but everything from understanding the business problem, designing it, developing it, and integrating it to Dynamics NAV. By doing so, the user can understand the power (and the danger) of customization and speak on the same terms when consultants are making recommendations on customization.”

Whereas consultants and developers should have knowledge about business processes, in order to understand the customer needs, this book intends the opposite: give the user an insight of the world developers are in. That way, users do understand what a developer is talking about. Why he is asking so much information. What he really means when he is talking about the possibilities and impossibilities, the advantages and disadvantages of customizations. In short: users now don’t have a reason to not understand developers.

That makes sense! It makes the book unique, in my opinion.

But now I think that the book title not completely covers the content. A better title would be ‘Understand Your Dynamics NAV Developer’ or something like that… 😉

So the book targets users, but also developers who already know how to develop, but want to get knowledge about the development process within Dynamics NAV. That’s a challenge in a challenge: writing a comprehensible book is one challenge, targeting two different groups of users, with different levels of knowledge is another challenge.

I start the reading and see if Alex managed to let users explore our development world, and meanwhile introduce it to new Dynamics NAV developers.